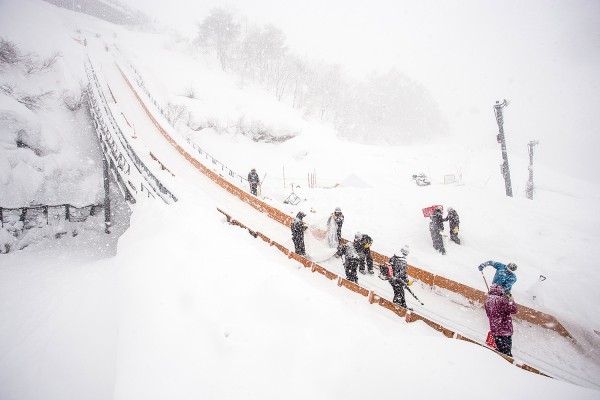 Its a very wild morning out on the slopes of Nozawa Onsen this morning with sideways blowing snow and blustery wind. Since last lifts yesterday we have had at least 15cm of fresh powder fall on the upper slopes with much more accumulating on the protected lower slopes. There will be good riding in most areas with the lower pistes being the pick initially. Later in the day when visibility improves the upper runs will be the pick. Very dangerous avalanche conditions remain.

Yesterday delivered very surprising conditions. Near blizzard conditions were forecast to remain all day long, however we had a partly cloudy day with light winds and even some sunshine. The opposite to what was forecast. There was also a competition running on the big 90m ski jump at the bottom of skyline, which made for exciting viewing.

We should see the hostile weather gradually ease throughout the day becoming very nice by tomorrow with even some sunshine predicted. Tuesday will be a bit warmer but then we should have a solid run of light snow showers for about half a week.