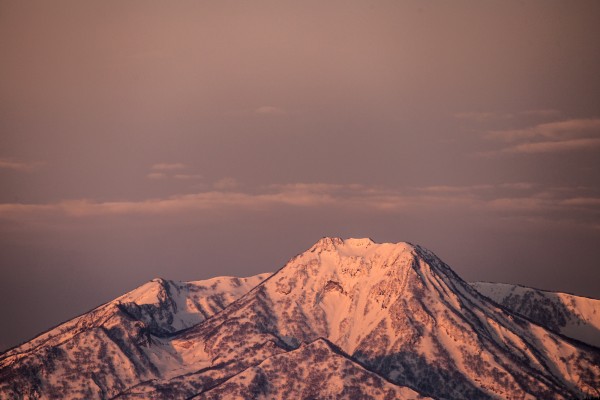 A dusky sunrise over Myoko-san.

The four meter mark has been cracked in Nozawa Onsen. Times have changed since the start of January when we were looking at a very lean season indeed. The base was nudged to 4.05m yesterday afternoon and another 20cm of fresh overnight snowfalls have pushed it up again to 4.10m this morning at Yamabiko. In Nozawa Onsen the peak base depth is usually reached around end of February or start of March so it may climb even higher still. Just one more week of consistent snow and we may be nearing record territory.

Thanks to the conclusion of the Japanese holiday over the weekend the slopes will be noticeable quieter today. Which is just as well as it was one of the busiest weekends of the season! Today we have had some good falls overnight refreshing the surface layer of powder that became chopped yesterday with the crowds. Like the forecast suggested we have some partly cloudy conditions with isolated snow showers filling the voids. Another day of perfect conditions as the winter continues.

Yesterday it snowed for most of the day. At times heavy, the snow constantly refreshed to slopes. However in most areas it was no match for the shear number of people searching for any trace of powder snow and the slopes were quickly tracked out. Those lucky few that were first down were rewarded with almost flawless snow conditions.

Looking ahead and tomorrow is lining up to be very similar to today with isolated snow showers and generally partly cloudy skies. Wednesday also looks similar but with more sun and less frequent snowfalls. Thursday is supposed to be full bluebird and quickly warming with strong sunshine as is Friday. By the weekend another colder period will make itself know with another few days of snowfalls.