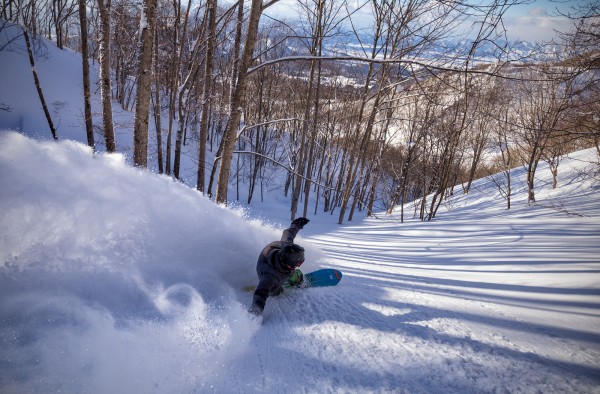 Base at top: 330 cm
Temp at Top: 0 Degree
Base at Uenotaira station: 240 cm
New snow since close: 0 cm
Weather: Overcast

Pavel blasts through untouched powder at a resort near Nozawa Onsen

It was a quality sunrise this morning. Across the valley a pink alpenglow lit up the Myoko Stratovolcano with a band of high cloud displaying a similar reflectance. Right now we are soaked in with thick mid level cloud, probably won’t be seeing the sun for a while. The skiing today will be decent with fast conditions early that will becoming slushy later with rising temperatures and possible rain later this afternoon. A large low pressure system is developing to our west and dragging warm moist air up from the south. As the low passes to our east at some point tonight the temperatures will drop dramatically as a NW flow establishes accompanied by heavy snow. Expect fairly crowded conditions this morning, becoming quieter later in the day.

Yesterday we saw some perfect weather and just about as perfect snow as you can get here with sunshine at the same time (at these latitudes the snow becomes sun affected fast). Considering it was the weekend and sunny it was pretty crowded with a long morning gondola line. But it was worth the wait with fresh stashes of powder, goggle tans and grand views.

To the all important forecast. Heavy snow and strong winds for tomorrow with snow conditions improving as the day goes on. Its probable an icy layer will still have effect for much of the day. Consistent snowfalls will hopefully burry this layer by Tuesday with a consequential decrease in stability. On Tuesday snowfalls will continue, ramping up again later in the afternoon and evening. By Wednesday winds will ease and we may even have the occasional sunny break. On Thursday night or Friday a very strong snowfall is predicted. All in all it looks to be a very decent week ahead.