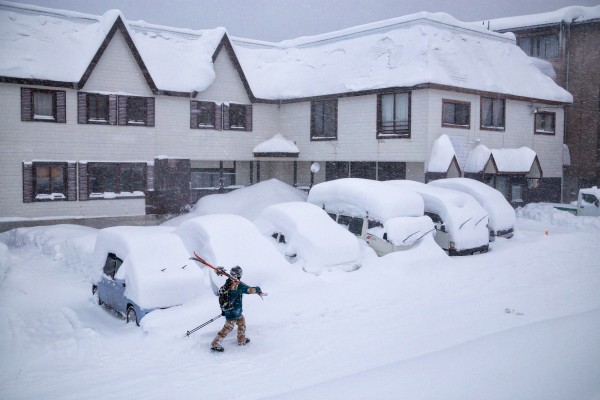 Strong winds blasted the township of Nozawa Onsen overnight and reports of heavy falls across the region are filtering in. Here we have received no less than 30cm on the upper mountain and 15cm down in the village. The fact that it was windy decreases the accuracy of measurements however one thing is for sure, there will be some very deep powder across the resort today. The areas which would hold the deepest snow are those that are protected from the wind. Zones such as Challange, Yamabiko four and Kandahar. Other areas on the more exposed ridglines, Skyline for example will hold far shallower snow if any at all. Use this information to your benefit for a great day.

The snowfalls yesterday never really got to any intense levels but remained consistent enough to collect 8cm from first to last lifts. It was extremely cold and windblown on the mountain, noticeably quiet as most took a day of rest. Piste conditions were not icy with the heavy fresh snowfalls adhering to and graduating temperature differentials in the snowpack. Therefore the skiing and boarding was much smoother than expected. Off piste, the appearance of frozen balls of ice, death cookies as they are called, made for tricky navigation through the trees.

Throughout today we are expecting snowfalls to continue at moderate levels but there is some potential for very short breaks of clear weather. Again tomorrow light falls are forecast with even a greater potential for periods of clear weather. Later in the week a return to big totals as a typical winter NW flow establishes itself over Honshu. Winds will be lighter than the past few days and the heaviest snowfalls are currently suggested for Thursday and Sunday night.