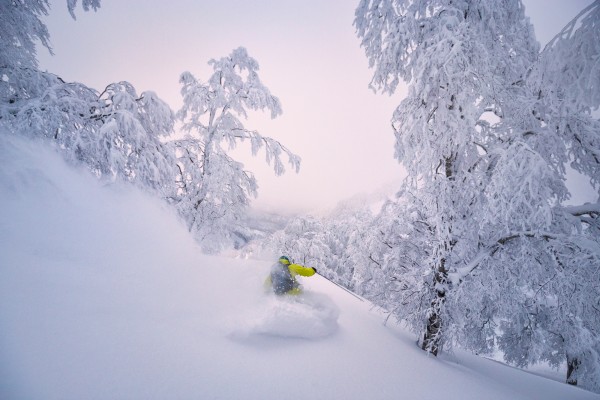 Yesterday was one of those days. Sublime powder snow coated the resort creating a blank canvas to carve a personal choice of riding artwork. Through the morning passing clouds teased with periods of snowfalls and occasional blue sky. But by the afternoon it became almost full bluebird with amazing light and snow loaded trees across the mountain. Yamabiko reached its peak snow depth for the season so far during the afternoon at 375cm. I think its a safe assumption that yesterday was one of the better days this season, to say the least.

Today some clouds have rolled in from the south creating a heavy atmosphere around the village. Its also a little warmer than yesterday but much of the mountain is still below freezing so the skiing will be good. Today it’ll be best on the well groomed pistes as most tree areas are tracked out until more snowfalls arrive. We may see some flurries of snow above 800m this afternoon preceding heavy snow overnight tonight where around 30cm or more wouldn’t surprise.

By tomorrow heavy snowfalls will be well and truely set in and will continue for most of Friday before easing back again during the afternoon. Cold temperatures and light to moderate snowfalls are expected to last for the weekend and even well into early next week. We may experience possible breaks of sun on Saturday and then again for Monday, Tuesday or Wednesday next week. All in all, a very good five days are ahead of us.