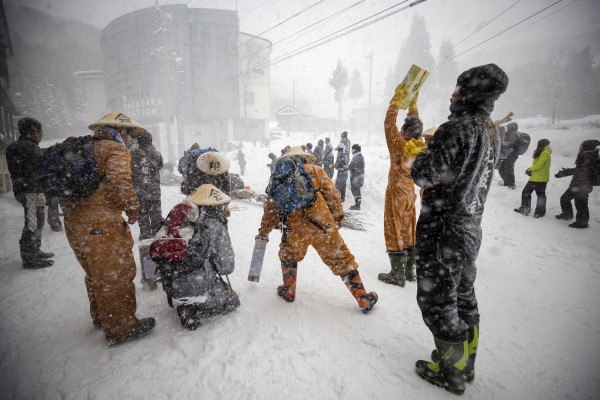 
Buried, inundated or swamped are all words to describe what we are currently experiencing in Nozawa Onsen. Right now the precipitation rates are truly amazing with very heavy snow and blizzard conditions right down to the village. 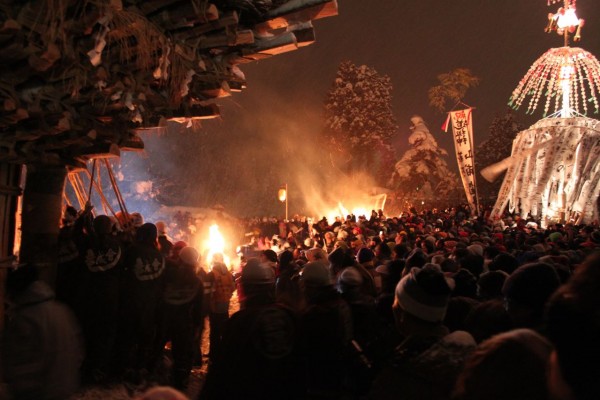 The stage is set for action tomorrow night

Since last lifts yesterday we have had a windblown 40-50cm fall on the upper mountain and 45cm down in the village. But since these recordings were taken some time between 6 and 7am id say the depth is significantly more than this by now, perhaps 70cm+. Early this morning the snow came in thick and fast, even the under street heating was no match for the powerful falls. The storm total now stands at 175cm officially. Its growing fast!

There are only a few places on the mountain you can ski with such depth. They are as steep as possible to avoid becoming bogged down and stuck fast. Id recommended staying on piste or very near to the piste at least until the snow settles. Its going to be a dangerous day out there today. For those who are a bit overwhelmed by the stormy weather, head down to the village where today the gigantic structure that will be set alight in tomorrows fire festival is being constructed.

Yesterday we had a magic day on the mountain. Light to moderate snowfalls continued for much of the day with a few breaks of lighter air in between. The snow was top quality, powder laps right down to the village. Overnight falls of 30cm are the perfect depth for Nozawa Onsen. These layers are the perfect amount to ski all areas of the resort without becoming too bogged down in shallow terrain. In other words, you need not straight-line Yamabiko. At 1pm the large centre tree was dragged down from the mountain to be used in the Fire Festival tower with many Sake refreshments flowing!

Looking at the forecast ahead we are about a third of the way through this impressive storm front. Very heavy snow is expected to continue for the rest of today and tonight. Precipitation rates will ease a touch tomorrow and then again on Monday. On Tuesday snow showers will become lighter and variable with the first possible bluebird day for Wednesday.

With all the snow there are some delayed or cancelled trains in the area. Shinkansen are not currently affected. http://traininfo.jreast.co.jp/train_info/e/shinetsu.aspx