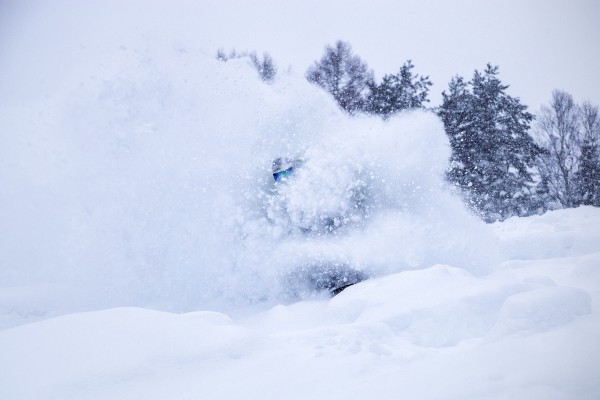 It will be deep, very deep.

A vicious gale roars outside the window. Snow is blown across the fields and then back again filling in any freshly cleared track within the hour. Bushes that once stood meters above the snow are all but gone. Such is the 36 hour blizzard in Nozawa Onsen. The storm continues with only a brief sign of pause this morning, before unleashing once more.

Since last lifts yesterday snow has fallen to the amount of 40cm, but with strong winds its hard to trust this measure (could be less or more). Since the snow started falling days ago we have had 245cm (at Yamabiko) transform the mountain slopes into an unfamiliar wonderland. It will be good today. It will be deep, very deep. Don’t head off piste as there are some extremely unstable layers and the likelihood of becoming stuck is an almost certainty. There are clueless people out there dropping things they shouldn’t, without even know where it funnels too. Don’t be one of these people. Save some energy for the fire festival and have an amazing day.

Yesterday was the deepest day in recent memory. Its unusual to have such prolonged heavy snowfalls in even a good season, which up until now was not. Heavy snow filled in tracks lap after lap. Extreme cold kept the snow in amazing condition; light and dryer than the Sahara. Even when chopped up it was still amazing skiing. These are the days we live for.

As the forecast stands we are just over half way through this current storm cycle. The heaviest falls were expected yesterday and slightly lighter but still powerful falls are expected today and tonight. Monday have received an upgrade of snowfalls but it won’t be as cold as yesterday. On Tuesday snowfalls will become light and isolated before potentially clearing on Wednesday and Thursday. Another good dump of snow is looking possible for next weekend.

Update: Since the opening of lifts at 8am another 10cm has fallen taking the base over 3meters. For the record we cracked 2meters on Friday night.