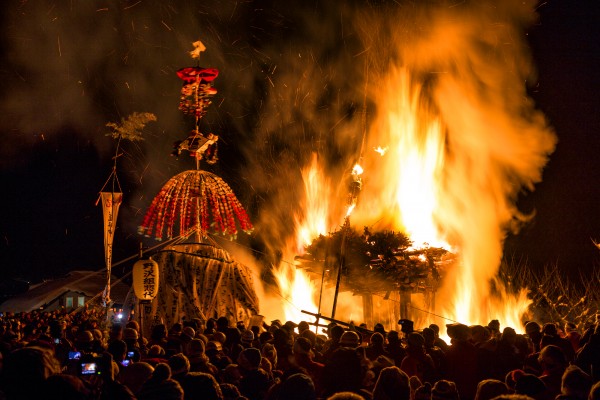 All the fire in Nozawa can’t stop this storm! The morning after the world renowned cultural event, the Nozawa Onsen Dosojin Fire Festival and there will no doubt be many sore heads about town. But those with an eye on the pow will reap rewards this morning with classic winter powder skiing conditions. Heavy snowfalls and blizzard conditions continued overnight refreshing the slopes to a clean slate. There will be no shortage of wind features and heaps of fun skiing and boarding on offer. Be careful, the snow is in parts deeper than head high. Don’t get yourself into anything you can’t get yourself out of.

Yesterday was another best day of the season. At least equal to the day before. The snow was much more wind compacted, making significantly easier skiing and boarding. Strong winds persisted all day with arctic windchill towards the summit. Snowfalls also continued adding another 17cm of fresh.

Last night the age old tradition of the Dosojin Fire Festival was enjoyed by hundreds under a blanket of snow. As always, it was a somewhat dangerous spectacle as the tower was attacked, defended and eventually burned to the ground. The fire burned with such ferocity that falling snow flakes melted into rain drops in the immediate vicinity. Even after many times of viewing, the mesmerising display never gets boring and is well worth the trip alone to Nozawa Onsen.

According to the forecast we are in for another day much the same as the past two. Snowfalls will intensify overnight adding significant numbers to the fast growing base. The flakes will gradually ease into Tuesday, this will mark the end of this extremely cold and powerful storm system. By Wednesday we expect a beautiful clear bluebird and no additional snowfalls. Further ahead, another strong system is looking plausible around next weekend.