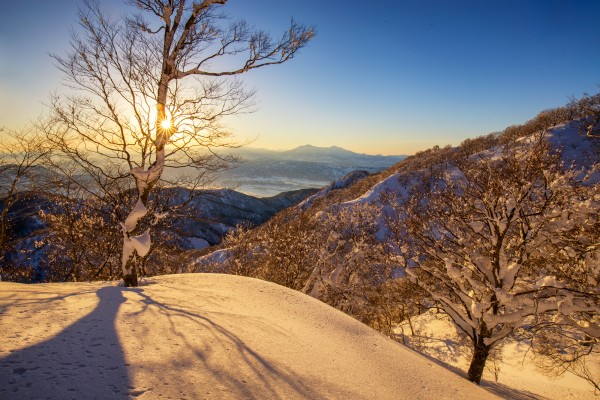 Unexpectedly we have some strong winds this morning forcing closure of the entire upper half of the mountain. The Hikage gondola and Paradise lift are the two highest running lifts presently. Across the valley the powerful southerly winds are whipping impressive spindrift off the summit of Mt Hiuchi. It may feel benign down in the village but realities may change drastically with altitude. A good day to rest sore feet.

Yesterday was pretty much as good as it gets. The only downside that there wasn’t any fresh falls overnight preceding. The morning offered some of the most impressive long range views that can be had. Mountain ranges usually hidden by haze or cloud were crystal clear. It was even possible to spot boats plying the Sea of Japan off to the west. The snow was excellent, remaining dry and chalky into the afternoon at Yamabiko, but became sun affected on the south facing slopes. The treed areas are now very nicely filled in with only a few brushes poking through. If every day was like yesterday we would always be very tired!

We are expecting snowfalls tonight across the mountain and these are predicted to continue into tomorrow before gradually easing. Perhaps 10-15cm will accumulate on the upper mountain. Sunday will be generally fine before rain showers move over in the evening, turning to snow at some point on Monday. From then on a decent run of snow is forecast during next week with continued NW winds.